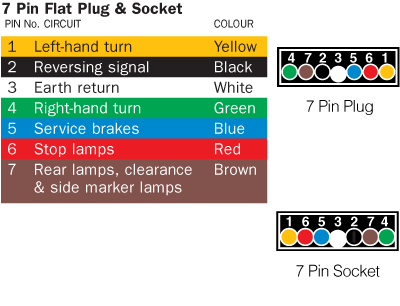 On the other hand, flat connectors have only one possible pinout in Australia, one possible orientation (they aren’t half rotated), and the extended 12 pin version is even compatible with the 7 pin one. So every rectangular connector in Australia is compatible!

This is an extension of the 7 pin flat. The 7 pin flat plug will fit into a 12 pin flat socket and work perfectly.

Identifying: Plug size is similar to an Australian 10c coin. There is a noticeably larger gap between 1 and 6 on this plug, though some trailer places rotate this connector that the yellow is at the top. Socket and plug are keyed.

Why is it more reliable? I think part of it is that the flat connector has the female part (the part you need to protect most) covered and attached to the vehicle, whereas the 7 pin round – although the connector has the female socket on the car, the plug on the trailer has female sockets for the individual pins. I don’t have the luxury of keeping my trailers in a garage – they are out in the elements – which is great if you like providing homes for bugs. I can’t count the number of times I had to remove critters from the trailer side of the 7 pin round connector. Not so with the 7 pin flat.

It might just be me, but I also think it makes more sense to have the socket powered rather than the plug (just like household 240v sockets – imagine if they were 240v prongs sticking out of your walls at home that were live).  It’s hard to short out a powered socket as you need two conducting prongs, whereas shorting out a powered plug is simply a matter of touching two of the prongs with something conductive (like a screwdriver, finger, etc).

So if you have the choice, go flat! For years in Queensland the small 7 pin round was the most common, but since about 2010, the flat has become the norm. I bought a car a few years ago and immediately had the round socket changed to a flat one, and the towbar place who fitted it said that flat had become more common.