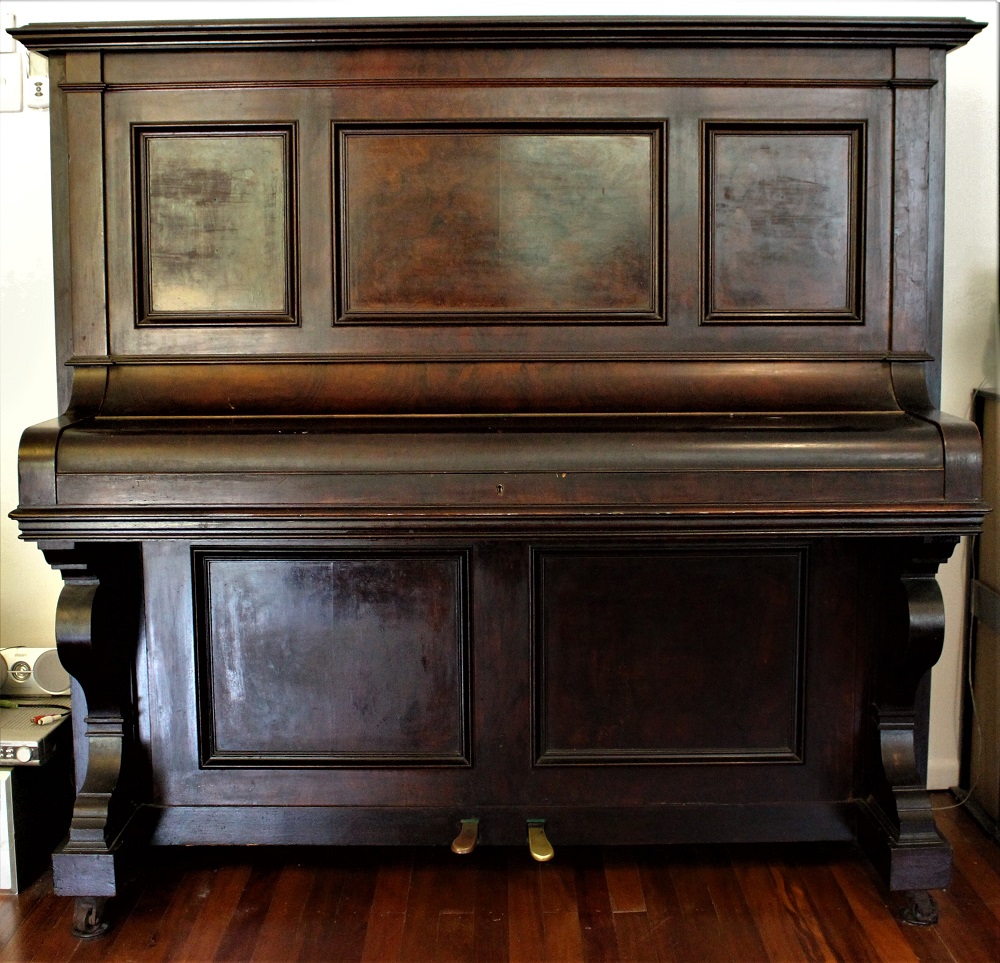 How old is my Australian Made Beale Piano?

Enter your serial number below to find out. Your Beale Piano was made sometime between 1893 and 1976. We inherrited a Beale piano and wanted to know its age. So after some digging I found a table of serial numbers and year of manufacture. Turns out our Beale is over 100 years old.

If you have the serial number, you can use the tool below to find out the age of your Beale.

The serial number is located inside the top section of the piano, either on the left or right side. Sometimes on the side wall, other times on the top of the side wall. Lift the front half of the lid to find the serial number. It is typically a 5 digit number from 16448 to 94983, stamped into the timber. Here is an example of where to find it on a 1908 Beale (inside red oval):

For serial numbers 1? (unsure what the first number was) to 16448 the exact year is unknown. 1884 to 1893 are Hapsburg Beales (also spelled Habsberg) imported from Germany. Then the Australian made Beales from 1893 to approx 1902 are non iron tuning system. In about 1902 the Bader-Vader iron tuning system was introduced. The last Australian made Beale was made in 1976.

For the Hapsburg Beales, the number can be found engraved, like this:

There are also numbers written on the side of the piano keys. This is not a serial number or year. The keys are numbered to allow you to remove them and put them back in the correct order.

Our piano hasn’t been tuned in a while, so while it was at concert pitch, it has eased off a bit. Also please excuse the background noises and static – I recorded this on my phone when my wife was playing one day.

There’s an art to tuning a Beale. The first piano tuner we tried broke 2 strings and basically gave up. Other piano tuners just refuse to tune them.  The steel plank and age of most Beales requires special techniques, and those not familiar with them hate Beales. On the plus side, the steel plank means they need tuning less frequently than other pianos. The original Beale instructions suggest that the piano will “very seldom require tuning”.

Given they are the most popular make of pianos in Australia, it’s surprising more piano tuners don’t know to tune a Beale piano. Then we found a guy who did a great job. Thanks Jack! After 8 years of neglect, he had our 100 year old Beale in concert pitch in a couple of hours, without breaking anything. If you are in the Brisbane area, I highly recommend Jack the piano tuner: https://www.facebook.com/Jackpianotuner.

Caring for Your Beale Piano

As well as regularly tuning your Beale, you can keep it in good condition and looking amazing too.

We were privileged to have Robert Menhenick comment on this post about his 8 years working at Beale in the 1950’s as a French Polisher. I emailed Bob to ask for any tips or advice he could pass on to Beale owners about maintaining the finish on a Beale piano, and he said this:

I find any of the modern day furniture polishes do a good job, I would suggest Sheraton as the best. All of the pianos produced when I was there were finished in lacquer. Regards, Bob Menhenick

Thanks so much Bob!

Of course, if all else fails you can go by the original instructions from the Beale factory stuck to the back of the front board of the Piano (I’ve typed out the text below to make it more legible):

DRAUGHTS AND HEAT. Do not place the Piano very close to the fireplace, nor near an open window, nor in a passage. If placed in the corner of the room which is furthest from window and door it will sound best, look the handsomest, and be quite out of the way. Keep the back at least five inches from the wall.

VERMIN are, of course, destructive to some of the parts if not excluded. Examine the felts occasionally and see that neither cockroaches nor other insects have entered the instrument when left open. Do not use insecticide. A few mothballs are a preventive.

DAMP IS DESTRUCTIVE. Neither ivory, leather, felt, cloth, glue, nor polish will endure damp air without injury. Therefore avoid moisture of all kinds. Keep the instrument out of damp rooms. Do not put vases of flowers upon it.

POLISH. To clean and renew, use a mixture of half raw linseed oil, half methylated spirits. Shake well. Moisten a soft pad or clean white rag and rub gently till surface bright and dry. Clean off with another soft, clean, dry rag. Avoid “Polish Revivers” Never allow the sunshine to touch the polish, else it will blister, crank, and spoil.

COVER THE PIANO. When not in use, keep it completely covered with a cotton cloth, made to fit. The beauty of its exterior and the sweetness of its tone will thus be long maintained.

INTERIOR. Once in two or three months take off the top and bottom doors, then lift out the lid or “fall,” and the little slip which covers up the keys. With bellows blow strongly all dust and fluff out of action and wires. The keys are numbered, may be lifted out and placed in a row.

TUNING. Alter no screws or adjustment. Allow no one to interfere with or tinker the parts in any way. If the foregoing instructions be adhered to the Piano will very seldom require tuning, and then it should be tuned only by a competent person who is interested in its preservation. LET WELL ALONE.

SIMPLE INSTRUCTIONS for TUNING THE BEALE-VADER PATENT PIANOS
Proceed in the usual manner. Do NOT bend the tuning pins in any way.
Should a new string be required, take out the back panel, gently loosen the respective tension screw by a half turn only. Remove the old string and insert the new. Then screw up tightly again using a large screw-driver and tune as usual.

To replace a tuning-pin injured by carelessness, remove the tension-screw and push in the pin from the front of the piano. Clean out the hole thoroughly and lubricate slightly the conical part of the tuning-pin with vaseline or pure tallow before inserting it. Do not use oil, nor any grease containing salt. Screw up nearly tight, make your wire coil on the pin, then screw up tightly and tune as usual.

By closely following these simple rules the tuner is enabled to arrive at a very accurate pitch to his own and his client’s satisfaction.

Beale Pianos, like all pianos built before the 1960s / 1970s were made with ivory lined keys. Like most pianos, the ivory consists of three thin veneers (slices) of ivory covering the top and front of the white keys. Australia is introducing laws to ban the sale of second hand goods containing ivory, but with an exception for musical instruments made before the 1970s. I imagine it would be possible to remove the ivory veneers and replace them with plastic.

A Brief History of Australian Made Beale Pianos

1884: Octavius Beale set up a business in Sydney to import pianos and sewing machines into Australia. The sewing machines didn’t last long, but he found success importing German upright pianos (of which some still survive) called Hapsburg Beales or Habsburg Beales. Below is a photo of one:

1893: Beale opened Australia’s first piano factory in Sydney. He made pianos using Australian timbers, built for Australian conditions. The mill department of the factory burned down in a fire in 1901, though thanks to the modular layout of the factory, no other departments were lost.

1893 – 1902: Beale introduced an innovative all-iron tuning system. The patent was granted in 1902, though  the exact date it was invented and introduced into manufacturing is unknown, but predates the patenting by some years. Beale was dissatisfied with the timber tuning systems used in European pianos which didn’t hold their tune long enough in Australia’s heat and humidity, so along with Johann Carl Vader – the manager of the Beale factory – he came up with a solution. The all-iron tuning system is effectively a massive iron plate to which the strings are attached. It’s a bit more refined than that though, and is entirely encased inside the piano. Thanks to this iron plate, Beales stay in tune for a long time, but weigh a lot more than other pianos, and require an experienced piano tuner to adjust. It seems that some of the very early iron-tuning system pianos (prior to being patented) simply had “Beale and Co”. Then from about 1902, the early 20th Century Beale pianos had “Beale-Vader Tuning System” embossed in large lettering on it like this:

1902: Sir Edmund Barton (Australian Prime Minister) opened the new Beale factory at Annandale in Sydney, which became the largest piano factory in the southern hemisphere and the British Empire in the early 1900s. This was a remarkable factory, which manufactured every single component of the entire piano. It had iron and brass foundries, electroplating, machining, as well as all the timber workshops and kilns (for drying timber) and experimental labs. Basically raw materials in, Beale pianos out. The factory could produce up to 3,000 pianos a year (1922 was the record year with 3,000 made). Here is an example of a piano made in 1908 (our piano):

1943-1945: Beale manufactured parts for the de Havilland Mosquito aircraft during World War 2. The Mosquito was an innovative UK aircraft constructed primarily from timber (unlike the aluminium Spitfires and such), which allowed timber manufacturers (including piano makers) in the UK, USA. Canada and Australia to use their factories for the WW2 war effort. A few Beale pianos were also made in this time.

Beale was born in Ireland on 23 February 1850 at Mountmellick, Queen’s County. Beale first arrived in Australia in 1854. He was schooled partly in Hobart, then in Ireland. He spent some years in Melbourne, then New Zealand, and returned to Australia and married Elizabeth Baily in Sydney in 1875 and had thirteen children. He established his piano manufacturing business in Sydney, though travelled often. He spent time in London with his family during WW1 while his three sons served in active duty. Outside his business pursuits, Beale had his quirks – pursuing medical conspiracies and population theories (he even paid for a Royal Commission into secret drugs). While his theories and report were sidelined, Beale was however well respected and made a Fellow of the London Royal Historical Society and the Royal Society of Arts. Beale also served as President of the New South Wales Chamber of Manufactures and Chambers of Commerce of the Commonwealth of Australia. He was also appointed as a Trustee of the Australian Museum and and the Bank of New South Wales (which later became Westpac). He also grew orchids and rare plants, and studied Australian timbers extensively. He died in 1930 at eighty years of age in a car accident in New South Wales.

The serial numbers below are the first piano made in the year shown. The tool at the top of the page is quicker, but this table will give you an idea for some of the vague years (like during WWI and before 1905):

109 thoughts on “When Was my Australian Beale Piano Made?”

Scroll back to top